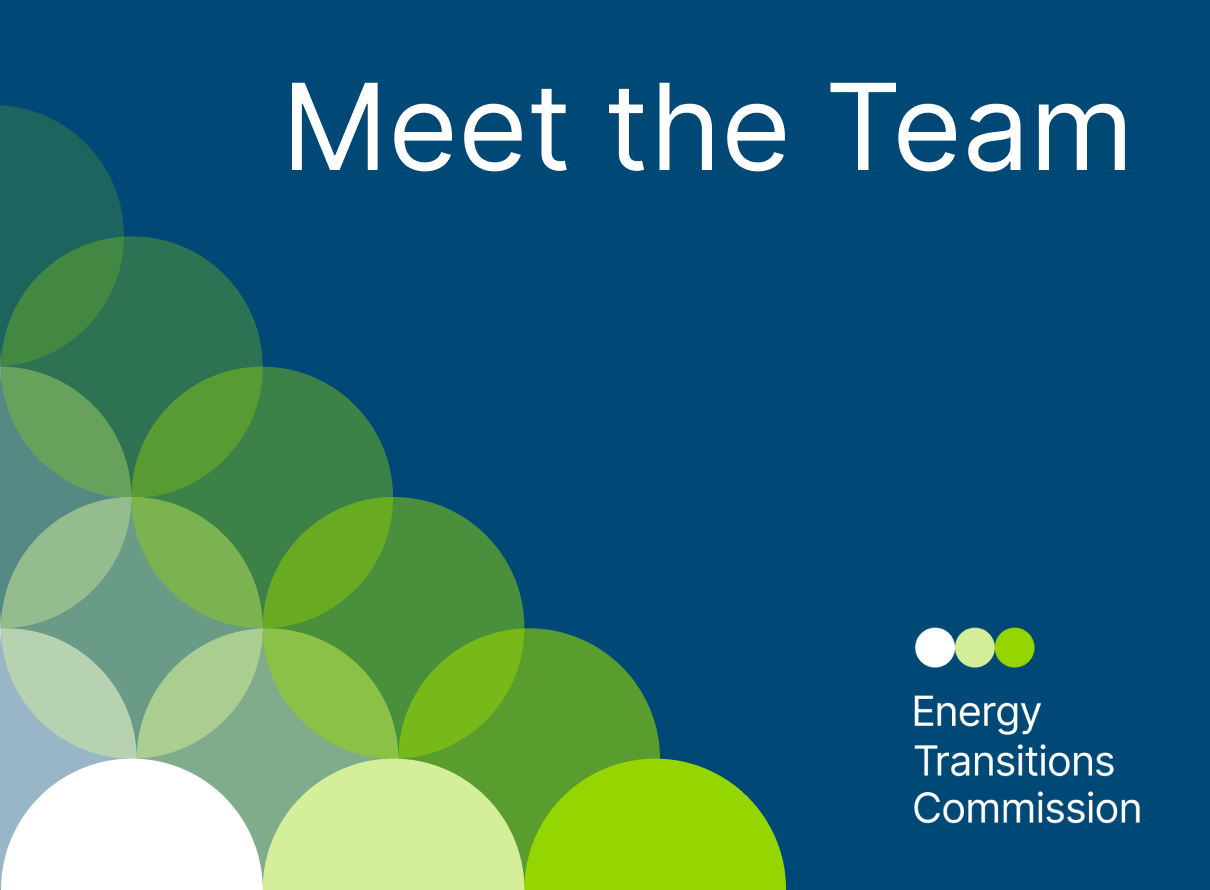 Today we introduce Mike Hemsley, newly appointed Deputy Director at the ETC, previously the Head of Strategic Insights & Analysis. Mike has led the analytical teams which produced our Energy Security Insights Briefing, the Keeping 1.5°C Alive report and carried out the assessment of COP26 commitments.

I had followed the Energy Transitions Commission for many years and was very impressed by a lot of its work. Particularly the Mission Possible report, which showed that you can decarbonise everything in the world. That allowed people to understand that even heavy industry can be decarbonised, and it doesn’t necessarily cost that much. And for me it was important as evidence used in setting the world’s net-zero targets. I don’t think you can say the ETC alone gave us these worldwide targets, but that was definitely a very important part of the conversation. For example, at the time of publication I worked at the Committee on Climate Change, and we cited the Mission Possible work as an important piece of evidence in recommending the UK’s net-zero targets. So I really admired that.

I’d worked on UK climate change for a while, but the UK is actually doing quite well compared to the rest of the world in terms of its relative progress in reducing emissions in the power sector. So I wanted more of a challenge and I wanted to focus on global issues as I now do at the ETC.

There have been lots. Getting to think about global decarbonisation issues is a real privilege. I look back at all the conversations that we have had around this and it has really been fascinating. The two things I’m particularly proud of are:

The report on Carbon Dioxide Removals, Mind the Gap. There is a recognized moral hazard to negotiate between removing emissions compared to reducing them. I feel the ETC really navigated that hazard well, engaging with a new set of experts and crossing the boundary between Natural Climate Solutions such as tree-planting and Engineered Solutions such as Direct Air Capture was also really interesting.

The other one was Keeping 1.5 °C Alive, which really cut through the noise on what’s really important in reducing emissions in the 2020s and that is methane, coal and deforestation. If you can target action in those three areas that gives the world a much better fighting chance.

Personally, as a job, energy transition means doing something interesting and meaningful on a day-to-day basis, which I really, really enjoy. That’s the reason I moved into this field ten years ago.

More holistically, the energy transition is a chance for the world to create a better, more sustainable future, without any more costs than our current environmentally damaging energy practices. Basically, we can do a lot better than we are doing today – it’s completely possible. And our job focuses on ways to accelerate that journey as much as possible.

I think doing things quickly enough – and related to that is probably NIMBYism (Not In My Back Yard!) .

When you look globally at the progress we’ve made in reducing technology costs in terms of renewables and electric vehicles and things like that, it’s extremely exciting. The answer should be “build renewables like you’ve never built anything else before, and we’ll all be fine.”

Unfortunately, it doesn’t quite work like that. To some extent amongst policymakers there is still the suspicion that renewables are not that cheap and they don’t necessarily work. But I think the energy community really has all the answers to why a renewables-dominated system works and the ETC also presents these in our Clean Electrification report.

Related to this is what people on the ground think. When you ask people if they care about climate change – nowadays most will say “Yes, it’s in my top five priorities.” This is consistent in many countries world-wide. But then, when you try and build renewable energy-related projects near to them, and they start to think about their house prices and related worries… it’s a different story and they often reject projects on the ground.

Historically not many people used to see energy production, apart from those who worked in it. Now we live in a world where it’s much more visible. Even though it’s clean energy, my worry is that people’s at times selfish local motivations get in the way of overarching global progress in this area.

Everything we’re working on that’s coming up! But seriously, I think what the ETC does so well is it cuts through the noise in really interesting global energy debates and we’re going to do that in a few of the pieces coming out this year.

I’m really excited about our work on low-carbon finance related to the energy transition because we are really putting into context what the real numbers are. How we think we can get there and, particularly, how you need to direct flows into emerging markets and developed economies. We also touch upon where regulation of the financial system is important and where it’s not really as impactful. A lot of people talk about its importance but don’t actually objectively assess what we think that can achieve. I think the ETC is going to do a really good job there.

We’re going to apply that kind of thinking to all the other areas we’re looking at as well; resource use in the energy transition, energy productivity, barriers to clean electrification and planning and permitting.

Overall, continuing to cut through the noise in the global energy debate is what I’m excited about.

The best piece of advice I’ve received is “Be sure to take the time to do the thinking”.

I think it’s quite easy in this world, which is constantly looking for outputs and productivity, to not fully think things through. Taking that time is really, really important. I think that is something I also appreciate about the ETC – getting to the right answer, not necessarily getting to the most urgently timely answer. Taking the time to get to the right answer is really important.

Get to know the ETC's Global Programmes Lead, Philip Lake, and what he has accomplished through the regional programmes in…
Read more

Get to know Ita Kettleborough, Director of the Energy Transitions Commission. For the last two and a half years Ita…
Read more

Today we sit down to talk with Laëtitia de Villepin, our Head of Thought Leadership, a ‘veteran’ of the ETC…
Read more
Tweet Share