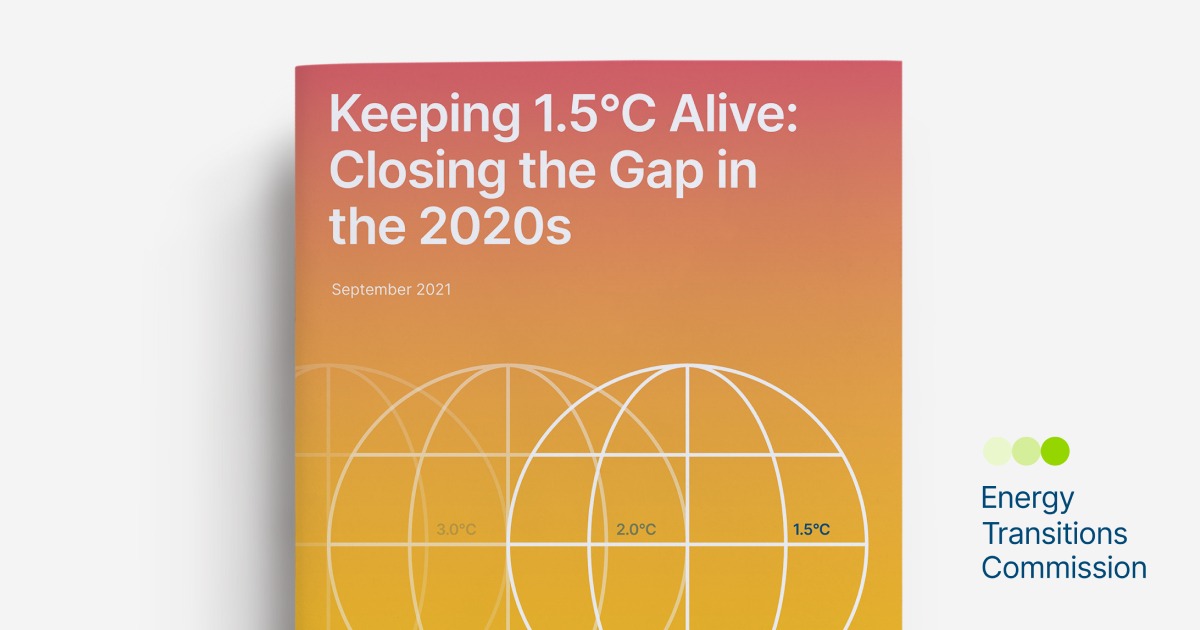 London, 30 September 2021 — The Energy Transitions Commission (ETC) today published its latest report, Keeping 1.5°C Alive: Closing the Gap in the 2020s. The report identifies six sets  of actions which could keep the world on a path to limit global warming to 1.5°C and which could be catalysed by commitments made at COP26.

One of those actions is particularly crucial – cutting methane emissions by 40% by 2030.

Methane is a hugely powerful greenhouse gas, which the IPCC estimates has accounted for about 40% of global warming since preindustrial times. Measured over a 100 year period a tonne of methane produces as much global warming as 28 tonnes of CO2, but over 20 years as much as 84 tonnes. As the world runs out of time to prevent potentially catastrophic climate change, cuts in methane emissions are therefore the most effective way to limit further warming. But many national climate action plans do not focus enough on this crucial priority.

The ETC report therefore outlines actions to achieve methane emission reductions of 140 million tonnes per year by 2030 (40% of the current level), which would be equivalent to 3.5Gt -11Gt per year of CO2 emission reductions (depending on the time period considered).[1] This could be achieved through a 60% cut in fossil fuel related methane emissions and a 30% cut in emissions from the agriculture and waste sectors.

Fossil fuel related methane emissions are estimated at around 120 million tonnes with about 40 million from coal and 80 million from oil and gas . Detailed analysis by the IEA shows that the latter could be cut dramatically via low-cost actions to reduce leaks. Targeted action by major emitters such as US, Russia, China and Canada would have a big impact. Agreement at COP26 to set target maximum methane leakage rates associated with oil and gas extraction supported by national regulation and internationally agreed monitoring and reporting systems, could deliver a high proportion of the technically feasible reduction.

Methane emissions from the world’s food, agricultural, and waste systems are currently around 240 million tonnes. By 2030, 30% of these could be reduced by reducing food waste on farms, in transport and in kitchens, by reducing meat consumption and through investment in better waste treatment, particularly in the developing world. Some funding from developed countries would be required to seize parts of this potential.

Given the vital importance of reducing methane emissions fast, COP26 should therefore be used as an opportunity to launch initiatives to reduce annual emissions by at least 40% by 2030, or 150 Mt CH4 per year, building on (but importantly, strengthening) the Global Methane Pledge.

“Reducing methane emissions fast is the action with the greatest short-term impact in the fight against climate change,” Adair Turner, Chair of the Energy Transitions Commission, said, “and in the fossil fuel sector we could cut emissions 60% by 2030 at a minimal cost. A strong commitment at COP26 to achieve this reduction, combined with initiatives to support more modest, yet still material reductions in the more complex food, agriculture and waste sector, would make a big contribution to limiting global warming to 1.5°C.”

To read the full Keeping 1.5°C Alive: Closing the Gap in the 2020s report click here

For further information please visit the ETC website at www.energy-transitions.org

The list of ETC Commissioners can be found here.

Technical Note: Given the different lifetimes of carbon dioxide and methane, estimates of the “carbon equivalent” effect of methane emissions depends on the timescale assumed. Over 100 years, a tonne of methane emitted today has a temperature forcing effect (and therefore impact on temperature on average over the period) about 28 times that of a tonne of carbon dioxide emitted today. However, viewed over 20 years, methane’s impact is around 84 times greater per tonne emitted. (These were estimates were refined to 29.5 and 82.5 respectively in the IPCC’s recent AR6 report). Neither measure is definitively “correct”, but the possibility of climate feedback loops and the need to limit temperature increases as rapidly as possible argues for a strong focus on the 20-year time frame and 84-times multiplier measure.