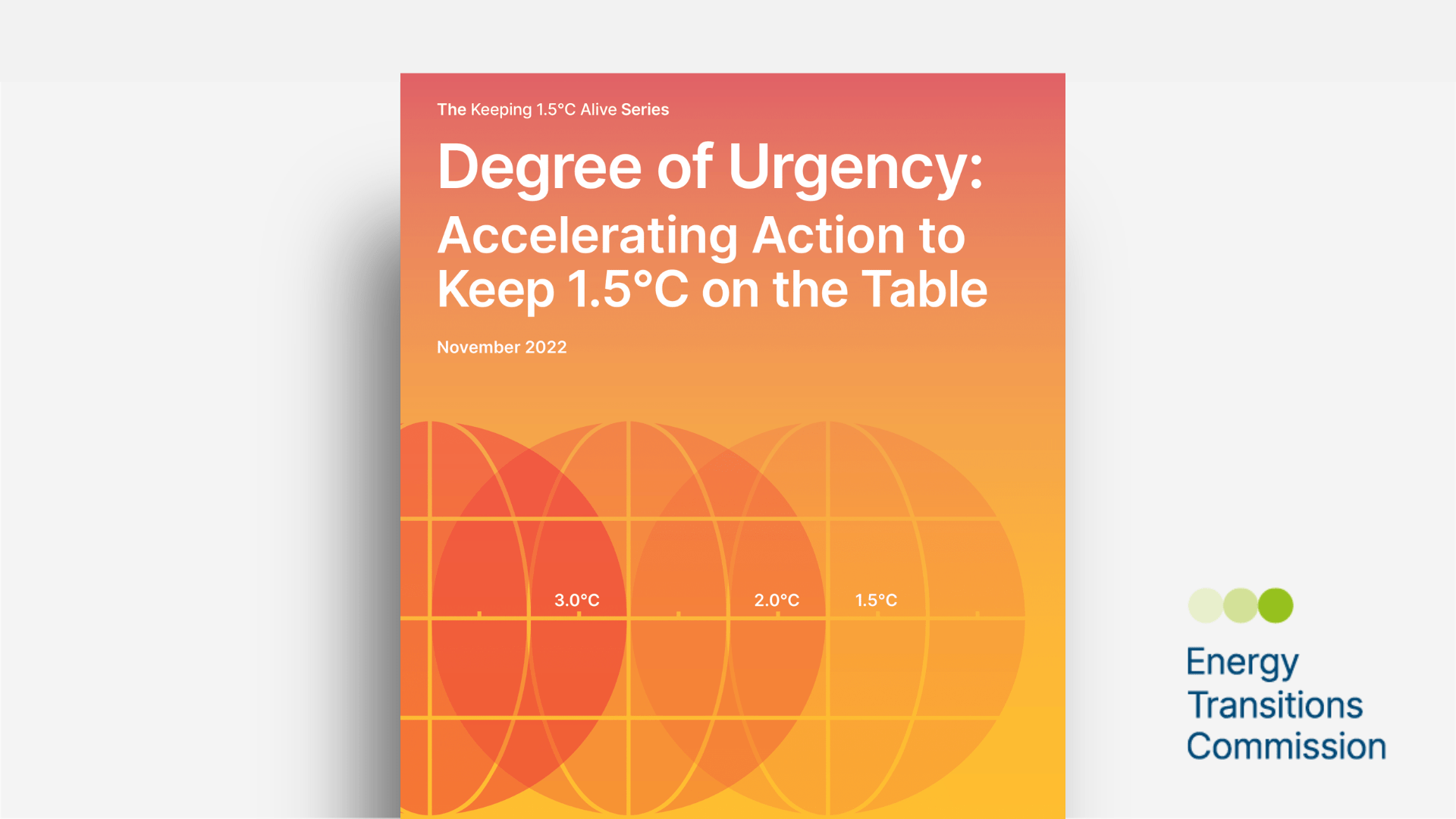 LONDON, 2 November 2022 – In its latest report, Degree of Urgency: Accelerating Action to 1.5°C on the Table, the Energy Transitions Commission (ETC), assesses progress since COP26 and outlines the priority areas for accelerated action at, and beyond, COP27.

Despite positive progress at COP26, current country pledges and commitments, even if fully implemented, still do not put the world on trajectory to limit global warming to 1.5°C. If the world is to have even a 50% chance of meeting that objective, COP27 must act as a catalyst to turn broad national commitments into specific actions and pave the way to more forceful measures to phase-out coal and end deforestation.

The economic and political situation ahead of COP27 is highly challenging. In addition to lingering pressures resulting from the Covid-19 pandemic and supply chain disruptions, the world now faces record energy and high food prices in many regions resulting from the war in Ukraine. Together these are leading to high inflation, lower growth and risks of recession in many countries.

There is a danger that energy security and short-term economic pressures, together with geopolitical tensions, will divert national and international attention from climate change related issues. But many of the actions needed to build greater energy security could also drive a faster transition to a low-carbon economy, as described in the ETC’s paper Energy Security Through Accelerated Transition. Despite the global geopolitical and macroeconomic headwinds, there is some evidence of progress on climate commitments.

Some voices are challenging whether a 1.5°C trajectory is still feasible. However, each 0.1°C rise above 1.5°C will have hugely significant climate change impacts. The world must continue to aim for this target, and to ensure that any overshoot of it is as low as possible. Both full implementation of COP26 commitments and further progress at COP27 are therefore essential if the world is to have a chance of limiting global warming to 1.5°C.

“Despite the current global economic and political challenges, we must keep focused on the global crises presented by climate change. Each 0.1 °C rise above 1.5°C will have a hugely significant impact.  Many of the actions needed to build greater energy security could also drive a faster transition to a more resilient and stable low-carbon economy. Both full implementation of COP26 commitments and further progress at COP27 are therefore essential if the world is to have a 50-50 chance of limiting global warming”, commented Adair Turner, Chair, Energy Transitions Commission.

Against this backdrop the ETC’s new report Degree of Urgency: Accelerating Action to Keep 1.5°C on the Table highlights three priority areas for accelerated progress:

“The developed countries must seize the opportunity created by Lula’s election, providing the financial support which can enable Brazil to end deforestation fast: this is a deal waiting to be done at COP27“, said Adair Turner, Chair, Energy Transitions Commission.

Progress at COP26 but still an ‘ambition gap’

Despite positive momentum at COP26, an ‘ambition gap’ remains – current country pledges (NDCs) and commitments do not yet put the world on a 1.5°C trajectory.

The formal country pledges (NDCs) and net-zero targets coming out of COP26 put the world on a pathway to above 2°C of warming. Although since then 24 countries have submitted updated NDCs, only Australia’s makes a material impact on closing the emissions gap in 2030.

COP26 also produced a series of sector agreements – including across deforestation, methane, and coal phase out – by countries and private participants that, if fully realised, could put the world on a pathway towards 1.8°C. However, the vast majority are yet to translate into formal country commitments, and critical agreements such as ending deforestation by 2030 are severely underfinanced.

Despite encouraging developments in policy and technology, the world is also facing an ‘implementation gap’ between pledged targets and on-the-ground progress.

This year there has been substantial policy action in the EU, US and China which has started to bridge the implementation gap, with ambitious targets (and strong prospects for implementation) set out in the REPowerEU package, the US Inflation Reduction Act, and in China’s 14th Five-Year-Plan.

To square the objectives of global emissions reductions and economic development needs in emerging and developing economies, it will be necessary that all countries – but in particular the developed economies and China – at the very least achieve and ideally overachieve or increase emissions reduction commitments. Doing this will drive technological progress which will reduce mitigation costs across the world.

“The ETC highlights critical actions for nations and companies if the world is to stand any chance of limiting global warming to 1.5°C. Rallying global leadership is at the heart of the Race to Resilience and the Race to Zero campaigns; and the ETC’s recommendations demonstrate that it is technically and economically feasible to get us back on track through the power of collaboration. Momentum-building is one thing, but it is now crucial that we pivot to rapid delivery for what’s left of the 2020s,” remarked Nigel Topping, the UN Climate Change High-Level Champion for the UK

Across all areas ambitious policy action can lead the way, but we identify two key additional drivers of action:

“In the year since COP26 where national priorities have appeared to drift away from climate, a stocktake of progress on the ground reveals a mixed picture. Rollout of renewables and electric vehicles is rapid and rising, and there is also optimism around progress in heavy industry and progressing energy efficiency. However, this alone is not enough and progress is urgently required in reducing methane emissions, early coal phase-out and ending deforestation,” said Mike Hemsley, Deputy Director, Energy Transitions Commission.

Whilst both high-income and developing countries can do more to accelerate their own emissions reductions, two further options exist that can accelerate progress:

Sumant Sinha, Chairman, Founder and CEO of ReNew Power stated that, “It is vital that countries around the world continue to move ahead and face the global challenge of climate change together. Urgent action is required to meet the dual objectives of emissions reductions and economic development needs in emerging and developing counties. Speedy deployment of zero-carbon power supported by the right policy environment is key to ensuring a real economy transition that will benefit the planet.”

Notes to editors:
This report constitutes a collective view of the Energy Transitions Commission. Members of the ETC endorse the general thrust of the arguments made in this report but should not be taken as agreeing with every finding or recommendation. The institutions with which the Commissioners are affiliated have not been asked to formally endorse the report.

Industry leaders back plan for zero-emissions aluminium, ammonia and steel